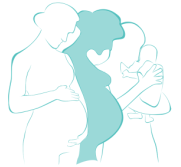 I am delighted to let you know that our daughter Saoirse was born on 1st February (at 40 weeks+10) weighing 7 pounds 12. Here is the story of her gentle birth.

At my last antenatal appointment on 19th February (at 40 weeks + 4), my consultant performed a sweep and, although was reasonably confident that this would be successful, he booked me in for induction on Friday, 29th February (at 40 weeks + 7). Between the sweep and induction day, I had a show and a few false starts …. surges started but then completely subsided so I presented to the hospital as planned for induction that Friday.

On admission, I asked if I could delay induction by a few days. The midwives were very supportive of this and, subject to the trace and scan showing a happy baby and plenty of fluids (which was the case), they saw no difficulty in delaying induction. The doctor, while also agreeing to allow induction to be delayed, very clearly stated that I was taking a risk in doing this (albeit small). This warning made me hugely hesitant but with Richie's support and encouragement, I decided to delay induction until Monday, 1st February. That evening, thinking I made the wrong choice, I panicked and called the hospital to rebook induction for the Saturday. The midwife I spoke to agreed to arrange this but reassured me that the results of the trace and scan suggested there would be no problem waiting until Monday. Again with Richie's full support, that's what I decided upon.

Early Monday morning I started to feel regular mild surges and at 3.30am I noticed I was bleeding. I called the hospital at that point and, as I was bleeding, they asked that I come in straight away (given that induction was planned for 8am that day anyway.). Richie's sister arrived to mind our 2 year old and we left for Holles Street at 5am (with surges getting closer together and more intense but still completely manageable!).

I arrived in the labour ward at 5.35am. At 5.55am, a doctor and midwife examined me. My cervix was not dilated but my fore waters were bulging and the hind waters had started to release. These, mixed with show, was the source of the bleeding I observed. The midwife asked me to start walking the corridor (squatting during surges) to speed things along. I put on the tens machine and prepared myself for a LONG morning. At this stage, surges were about 4 minutes apart.

At 6.35am, I felt lots of pressure and an urge to push. The midwife helped me back to the labour ward and on to the bed just in time for my waters to release. She examined me and I was fully dilated! I started pushing at 6.40am and Saoirse was born at 6.44am. No time for gas or air. In fact, the tens machine didn't move from the first setting. It was so quick, I think Saoirse and I were a little stunned.

The midwife presented Saoirse to us and let us work out the sex for ourselves ... there was immediate skin to skin, breastfeeding, delayed clamping of the cord and, in the end, Richie was to one to cut the cord. It was everything we'd hoped for and I felt like SUPERWOMAN!

Was it painful? Oh, yes … but oddly manageable!

Did the gentle birth programme help? Yes, no doubt about it!

What affirmation worked for me? “I can do anything for one minute”.

This birth was a wonderful experience for us Niamh and the gentle birth programme certainly facilitated that. Many thanks for the tools and techniques to ease Saoirse's gentle entry into the world.

Apologies for the delay Niamh. Life’s been a bit hectic over the last few weeks! Damien and I are happy to share that Baby Billy arrived on Sunday, Feb 14th (39+6). I woke up at 2am on Valentine’s Day with slight discomfort (period pains as some of the others described) surging every 5 minutes. By 11am we’d been listening to our affirmations, started using the TENS machine, made some breakfast and had a long hot shower. We were managing quite well but I felt ready to transition to the hospital to check my progress. At that point I had been having surges 60 seconds in duration and five minutes apart for over an hour. Once at the assessment unit at the Coombe I learned I’d become dehydrated and Billy’s heart beat was erratic; as a result I was placed on a continuous monitor. (As we discussed in the workshop, the monitor itself wasn’t uncomfortable but lying back in bed was the most uncomfortable (and unproductive) position for me in that moment but we breathed through it with help from the TENS.) Although initially meant to take only 20 minutes, I was on the monitor for two hours as the readings continued to be erratic. When the midwife checked my progress at 11:45 she informed me I was only 1-2 cm dilated. Since I wouldn’t be admitted until I was 3 cm; she recommended Damien and I walk around for 2 hours though I couldn’t imagine standing up at that point. The midwife tried to gently let me know that as a first time mom it would likely be a slow progression and we had hours ahead of us. Honestly I was gutted at this point and hit “the wall” - really questioning whether I could manage any longer. Although my birth preference was for a natural delivery I was ready for any and all pain management assistance which, at 1-2 cm, was limited to pethidine (which I was strongly considering!). But none was needed in the end as things really started moving! At 1pm my show and waters had released and another dilation check determined I’d progressed to 4-5cm and would be moved to the labour ward. The labour midwife had no time to register my dilation at that point. Due to Billy’s heartbeat she recommended we needed to start pushing. By 2pm Billy was born, put on my chest for skin to skin where he crawled for his first feed within the hour. His cord pulsed for 7 minutes before he was taken briefly for his first check.
I cannot sing the praises of the Coombe’s midwifery staff enough. Every midwife that worked with us first read and discussed my birth preferences with me. If we needed to consider an intervention they informed and discussed it with us with an obvious respect for our preferences. In the end, other than using the birthing pool (no time), the only straying from the plan was the continuous monitoring and coached pushing in the end (which the midwife apologized greatly for!). The top notch care continued in the postnatal ward. Billy had some trouble suckling in the first days. Midwives on every shift gave me one-on-one counselling and assistance – helping me to hand express colostrum every few hours (at first requiring 20 minutes for 2 ml of colostrum). Their skills, dedication and patience helped us become successful breastfeeders.
If I can be bold and offer three pieces of advice from Damien and my experience they would be (1) keep hydrated (2) be ready for “the wall” – that’s where my confidence faltered and when I needed Damien, my affirmations and all my reserves and (3) take advantage of all the feeding support offered - I was glad I didn’t take early discharge in order to have 72 hours of really good breastfeeding support before being on my own at home.
I'm really thankful for the GentleBirth program. I surely went into labour with less fear and more confidence then I would have without the program. Thanks Niamh!
Sorcha, Damien and Billy

On Saturday 26th March having gone to bed at midnight with all feeling as normal, I woke up about 3am with a strange feeling - I thought this might be labour starting so got up for some tea and to walk around the house. Ray came downstairs and because the waves seemed quite close he began timing them - they were about 3 to 3 and a half minutes apart and lasting between 30 - 50 seconds from the very start to finish! They were manageable in the beginning - Ray put the GentleBirth cds on the laptop and I was using my TENS machine. We were keeping an eye on the timing of the surges but there was still no definite pattern that we were expecting. When I wasn't able to talk through them Ray rang the hospital around 7am & the midwife advised us to come on in. As we were getting ready to leave my waters released.

We were brought into the assessment unit of the Rotunda at around 7.45 am - I was fully dilated which was a bit of a surprise to the midwife never mind to both me and Ray!! We were brought straight up to Delivery - I had my relaxation CD on for that journey & it helped focus me on the fact that our baby was on the way after our 9 month wait & forget about how fast it was all happening!! Little Donal arrived at 8.23am - hearing his first little cry was just overwhelming.

We had plenty of skin to skin with our little man before being brought to the ward at 11am.

While it wasn't exactly what we'd expected -preparing ourselves to stay at home for as long as possible and the 5.1.1 of surges - I wouldn't change any of it - Donal was just as excited to meet his mum & dad as we were to meet him

Hi Niamh, I won't make class tomorrow as our beautiful baby girl burst into the world at 8:54 am, all 7lb 7oz of her at 39+1, it wasn't exactly the gentle birth we'd planned and hoped for, but an amazing experience and the GentleBirth program helped us keep calm with the change of plan....
In hind sight I was probably labouring away all day as I felt off and cramping and queasy, thought baby's head was just engaging and in a bit of an awkward position at times! I went walking which probably helped big time, 2:30am I woke up with pains, 3am waters leaked and they weren't clear :( We started timing contractions which were about 4 mins apart and lasting 50 seconds, got to 3 mins apart by the time we left for the Rotunda, when we arrived in Rotunda around 5 am I was checked and already 5cm dilated, straight to delivery room, but on constant monitoring because of meconium , so couldn't move around much. I was so queasy already they didn't recommended gas and air, nor the pethidine as they didn't want to make baby sleepy with meconium, contractions were extremely intense now at about 2 mins apart and I knew I needed something so opted for the epidural, used the peanut ball on my side and had a hour of passive descent before pushing. I didn't top it up as I knew pushing stage was coming soon and I wanted some sensation to help my pushing and this worked very well, I was never totally numb and could still move my legs a bit (but not stand or bear weight). After an hour of pushing forceps got mentioned and I dug deep and thankfully Dawn was born 10mins later at 8:54am with the help of a kiwi cup, just a small tear for me with one continuous stitch.  We didn't get delayed clamping or immediate skin to skin as paediatrician was waiting to suction and check her over cause of meconium but thankfully she was just perfect and we had a good hour of skin to skin then after and we've been feeding away all day, so I think an incredibly quick labour for a first baby!!! Not at all what I was expecting! We're just over the moon, thank you so much for all your help and advice throughout.
Catherine, Darren and Dawn